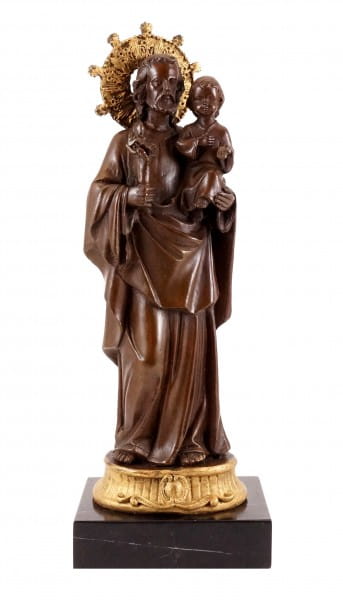 Description Evaluations 0
Description
Joseph is a figure in the Gospels, the husband of Mary, the mother of Jesus and the step father... more
Close menu

"Bronze figure - Joseph holding the Jesus-child - A. A. Weinman"

Joseph is a figure in the Gospels, the husband of Mary, the mother of Jesus and the step father of Jesus. In Roman Catholic, Eastern Orthodox and Anglican Christian traditions, he is regarded as Saint Joseph. On his left arm he holds the baby Jesus in the. Behind Joseph's head is a halo with gold colouring. As a counterpart to this, the US-American sculptor Adolph Alexander Weinman has created a sculpture of Mary with crucifix. The sculpture of  Mary you can find in our shop too. The sculpture bears the signature of the artist.