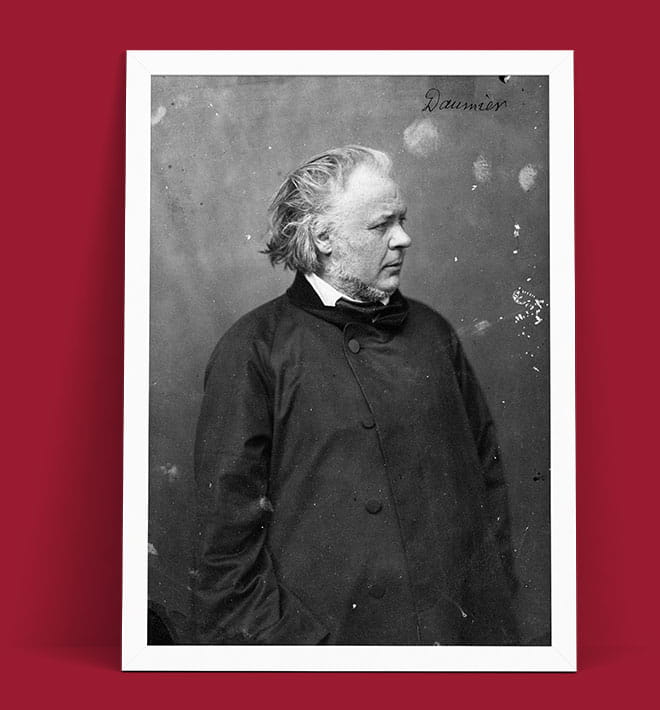 Honoré Daumier (1808-1879) was one of the greatest cartoonists of the 19th Century. He was an important representative of the French Realism and a chronicler of his times. He reached great attention with his political and critical cartoons.

Honoré Daumier was one of the greatest cartoonists of the 19th Century. He was an important representative of the French Realism and a chronicler of his times. He reached great attention with his political and critical cartoons.

was one of the greatest cartoonists of the 19th Century. He was an important representative of the French Realism and a chronicler of his times. He reached great attention with his political and critical cartoons.

He was working for several magazines and made different lithograph art works for La Caricature and Le Charivari, both very satirical papers. Besides the lithograph artworks, Daumier also created little sculptures and little portrays of different journalists and politicians on behalf of the paper La Caricature.

The life of Honoré Daumier

Having mastered the techniques of lithography, Daumier began his artistic career by producing plates for music publishers, and illustrations for advertisements.

The day he called King Louis Philippe a Gargantua, an insatiable drunkard and bottomless pit, he got arrested for six month. After the revolution of 1848 was over, the artist Daumier was working a short time again as a cartoonist and made some cartoons of the political conditions.

During this time he also made his very famous figures "Ratapoil" and "Robert Macaire".

The school, situated in a forest somewhere close to the village of Fontainebleau, probably just wanted to refuse the academically methods as well as finding a direct entrance to the nature. Daumier's paintings were characterized by a strong contrast of bright and dark colors as well as by rough lines as well. The whole graphically artwork of the artist Daumier included more than 4000 lithograph artworks and more than 1000 wood engravings. Because of the tragically profiles of Daumier`s work his descendant's estate is kind of general.

At the end of his life he was going blind, out of money and reputation. He died on February 10, 1879 in Valmondois, Val-d'Oise, a small department of Paris.

Honore was a prolific draftsman who produced over 500 paintings, 4000 lithographs, 1000 wood engravings, 1000 drawings, 100 sculptures he was perhaps best known for his caricatures of political figures and satires on the behavior of his countrymen, although posthumously the value of his painting has also been recognized.