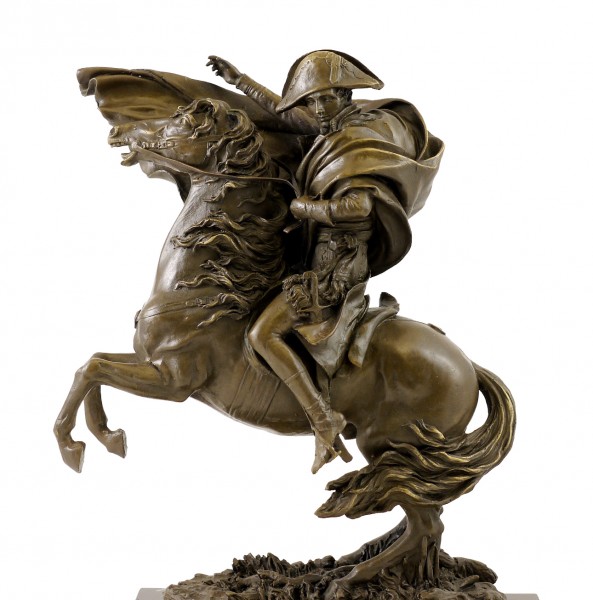 Description Evaluations 0
Description
Napoleon is illustrated in a victorious pose in the picture „Napoleon Bonaparte on Horseback“... more
Close menu

Napoleon is illustrated in a victorious pose in the picture „Napoleon Bonaparte on Horseback“. He crosses the Alps at the Great St. Bernard Pass on the painting by Jacques-Louis David (1800). This picture is also described as “propaganda painting”, because Napoleon is illustrated some weeks before his victory over the Austrian troops. The picture is created during the second coalition war. The crossing over the Alps happened in another way in the reality. Napoleon stretches his right arm victoriously upwards. His horse raises the front hoofs. The detailed elaborated locks of the equine mane, the tail and the clothes of Napoleon are emphasized in the sculpture.

The bronze figures are created in the process of lost-wax casting. The sculptures are made in handicraft. The compliance of the strict quality instructions are the basic for the high quality of our products.

The artist Pierre-Claude Gautherot, also known as Claude, was a French painter and sculptor. He was born in 1769 in Paris and he died in 1825 in the same city. Claude studied sculpture with his father, who was living from 1729 to 1802. The artist was known as Pierre and as Claude during his whole life time. He specialised in bust portraits. Claude illustrated famous persons. In 1787 he entered the atelier of Jacques-Louis David. They became close friends.