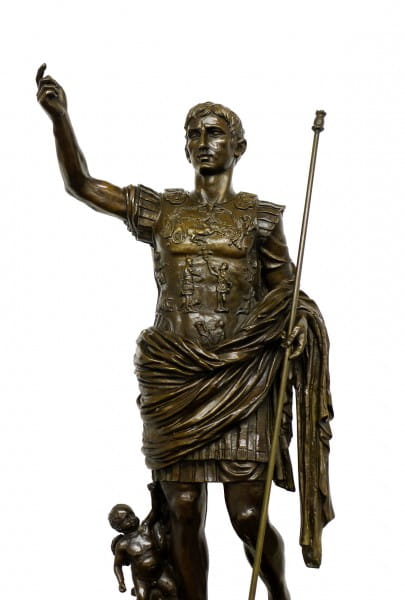 The Mythology Bronze Figure ”Julius Caesar“ is a stunning and very impressive image of the well known Roman statesman Gaius Julius Caesar and was once created by the artist Augustus. The detailed and realistic created sculpture is showing a great image of the famous Roman inhabitant doing a classical pose of an important ruler. Our sculpture is a nice and filigree designed art object made of 100% finest bronze that shows the great statesman, poet, military commander and rhetorician Julius Caesar with all his power, proud and grace. Because the bronze figure was created in a very natural way and with many details it is looking very realistic. For the perfect touch of the mythology bronze exhibit of Gaius Julius Caesar was affixed on a noble marble base and signed by its creator Augustus.

Gaius Julius Caesar was one of the best known humans of ancient Rome. Caesar was born on July 13, 100 BC in Rome and also died in Rome on March 15, 44 BC because of an assassination against him during a senate session. Even his wife Calpurnia dreamed about the attack and Caesar was thinking about staying at home instead of going to the senate session he finally decided to go and died that day. Gaius Julius Caesar was not only known as statesman, poet, military commander and rhetorician, he was also known as one of the important actors that helped to transform the Roman Republic into the well-known Roman Empire. During the time of the Roman Civil War (49 – 45 BC) he was a consul and was later announced dictator for life. Caesar died on March 15, 44 BC by a mortal dagger that was hitting him 23 times.