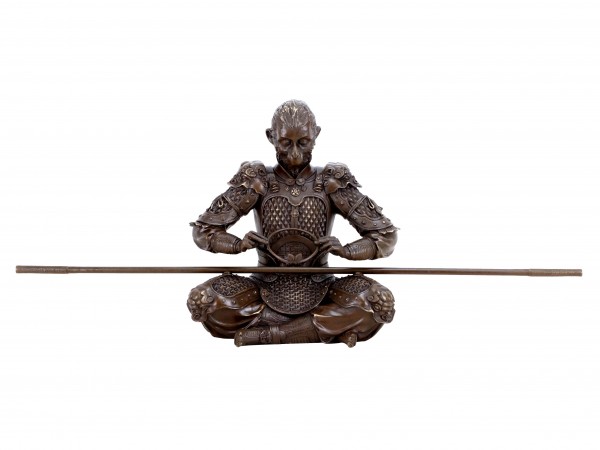 Description Evaluations 0
Description
Sun Wukong - better known as the King of the Apes - is a character in the Chinese novel... more
Close menu

Sun Wukong - better known as the King of the Apes - is a character in the Chinese novel Journey to the West, which was created in the 16th century and combines numerous myths and Chinese folk legends within itself. One of the stories in this novel is about Sun Wukong and his quest for immortality: During his apprenticeship with his Daoistic teacher, who takes in the ape in human clothes, Sun Wukong acquires magic powers like transformation, which enable him to turn into anything he desires. Later on, he even manages to acquire immortality, crowns himself King of the Apes and challenges the Emperor of the Heavens. The story about Sun Wukong is one of the most famous stories of China and has been adapted in films, books and comics many times. Just in 2018, the literary material was taken as an inspiration for Netflix’s Journey to the West.
This bronze ape sculpture is a complex sculptural interpretation by a contemporary Chinese artist, who captured the character of the King of Apes into bronze. In this instance, Sun Wukong is depicted as a warrior. He wears a detailed armor with numerous embellishments and a crown on his head. In his lap lies his legendary staff, with which he is supposedly able to change his heigt at will. The staff can be removed from the figurine. This two-part bronze Sun Wukong warrior sculpture is slightly polished in certain areas in order to highlight some of the bronze sculpture's features. Additionally, the freestanding figurine is equipped wit the signature of the artist.

The ape is an iconic animal in Asia. In many cases, myths and legends are to blame for the iconic role of this animal. For example, it is said that the ape was intelligent, clever, charming and at the same time disrespectful. The king of the apes Sun Wukong combines those characteristics in himself and is to this day an immensely popular figure in Chinese and Japanese legends.