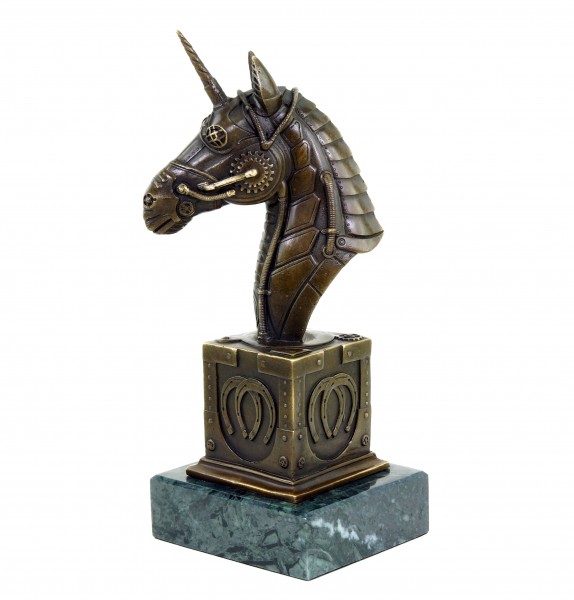 Description Evaluations 0
Description
This contemporary steampunk figurine is made of bronze and skilfully depicts an abstract unicorn... more
Close menu

This contemporary steampunk figurine is made of bronze and skilfully depicts an abstract unicorn in the form of a hybrid being between horse, mythical creature and machine. The horse head consists of numerous mechanical motifs, which result in a naturally formed bust. Additionally, the steampunk figurine consists of a cube, which can be seen as a transition to the green marble base, and which is adorned with two horseshoes among other things. The unicorn figurine deliberately moves away from stereotypical depictions, which makes it a highly interesting piece of contemporary art. The exclusive bronze figurine bears the signature of the artist and is serially numbered. It is limited to twenty pieces. Discover more gothic sculptures with a steampunk look such as a modern bull, a raven or a raven’s head in Kunst & Ambiente’s Bronzesho.

Martin Klein (*1979) is a well-known German painter and sculptor. In cooperation with Kunst & Ambiente’s Bronzefiguren und Skulpturen Manufaktur, Klein managed to make his motifs accessible to a wider audience. Thus, new statues and paintings by Klein can always be found in our Bronzeshop.