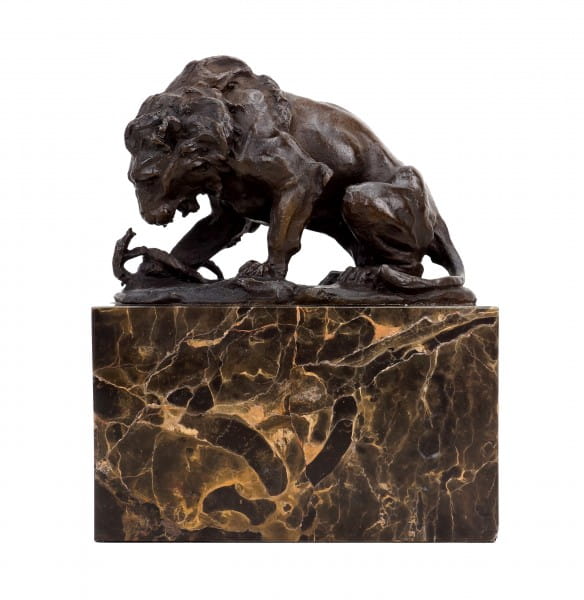 Dramatic scenes somewhere between mythology and French history are typical motifs of the bronze sculptures of romanticist artist Antoine-Louis Barye. Thus, his decorative animal figurine Lion and Serpent (1838) also captures an impressive moment into bronze. This sculpture, which is also known as Bronze Lion Tearing A Snake Apart (1838), is placed on a coloured marble base. The signed bronze figurine is characterised by its detailed surface structure, which depicts the fight to the death between the snake and the lion in an almost lifelike fashion. The impressive bronze sculpture is offered in various different sizes in our bronze shop.

All of the bronze sculptures in our assortment are produced by using the lost wax technique. Strict guidelines during the production process ensure the quality of our numerous bronze figurines and sculptures.

Antoine-Louis Bare (1795-1875) is known as one of the most important animal sculptors of the 19th century. His works mainly depict remarkable snapshots taken from nature and the world of animals. Furthermore, his virtuoso way of sculpting became known and appreciated even outside of France. Most of his pieces, including several paintings, are nowadays located in Parisian museums: The Artist’s Daughter, Eating Lion, Fighting Stags, Landscape of Fontainbleau, Lions in Front of Their Lair and Devouring Lion. Bronze replicas of his sculptures, which were originally mainly made from wood, are quite sought-after amongst collectors nowadays. Discover more animal figurines by Antoine-Louis Barye in Kunst & Ambiente’s bronze shop.