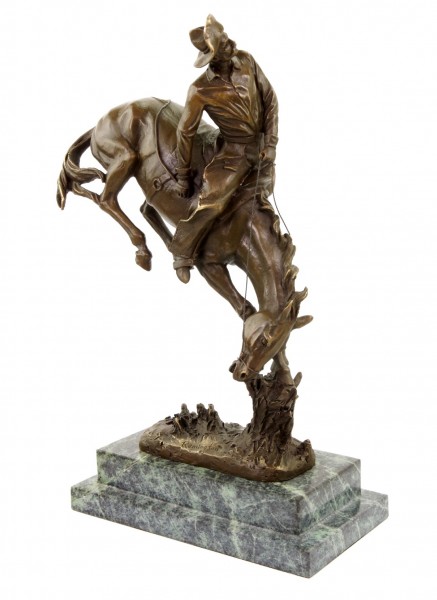 This lively equestrian statue by object artist Frederic Remington (1861-1909) is called The Outlaw and is an homage to the Wild West. And nothing depicts the Wild West better than the image of a cowboy on a horse. Like his most famous motif The Bronco Buster, Remington skilfully plays with the momentum of the depicted moment in the case of this bronze statue. With this snapshot, which is made of the finest bronze, the sculptor Frederic Remington portrays a detailed figure of a kicking horse. On its back is a cowboy in full gear, who in turn valiantly stays on the back of the shirking animal. Another remarkable detail is the fact that the realistic horse sculpture is only linked to the stylised prairie ground by its forelegs, which in turn enhances the overall effect of this lively scene. The bronze figurine is exclusively limited to 20 pieces and placed on a discreet marble base in grey and green hues. Additionally, the rider statue bears the signature of the artist and is serially numbered.

The production of our numerous bronze statues and figurines is subject to strict quality guidelines. All of the bronze figurines in our assortment are created via lost wax technique and are cast and refined by hand.

Frederic Remington (1861-1909) became famous thanks to his lively rider statues as well as his figurines of cowboys, Native Americans, and horses. His elaborate depictions are very charismatic and transport their observers directly into the era of the Wild West. The bronze statues do not only excite fans of Wild West films, they are rather a portrayal of historic perception - a piece of history in your own home.