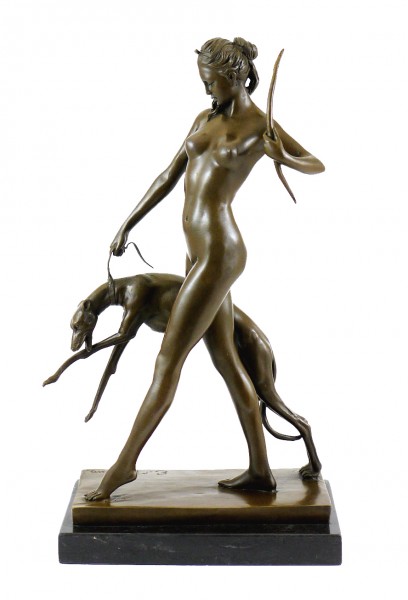 Description Evaluations 0
Description
The characters of the Roman and Greek mythology have always been popular themes in the visual... more
Close menu

The characters of the Roman and Greek mythology have always been popular themes in the visual arts. Edward McCartan has also been influenced by the deities of Roman mythology. So in the 1920s, he created the sculpture "Diana and Hound". The virgin huntress of the animals is shown here in its juvenile nudity. In her left hand the athletic Goddess is holding a bow; on the right hand she is leading her hunting dog. The sculpture is mounted on a black marble base. The signature is taken from the original.

The product is poured like all our products by hand and was made using the lost wax method, which guarantees a high degree of dimensional accuracy and surface quality. The production is subject to our strict quality guidelines.

Edward McCartan (1879-1947) is an American sculptor who specializes in figures of Roman mythology. His famous "Diana" from 1923 can be seen at the Metropolitan Museum of Modern Art today. Nowadays he is considered one of the most influential pioneers of American modern art in the 1920s.