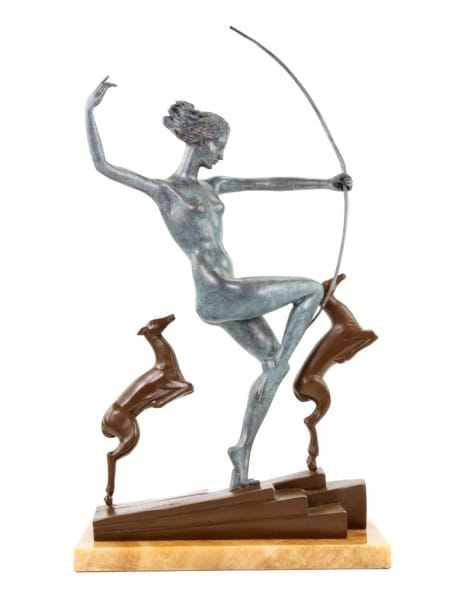 Description Evaluations 0
Description
Diana with fawns (1925) is a fascinating Art Deco statue made from high-quality bronze that was... more
Close menu

Diana with fawns (1925) is a fascinating Art Deco statue made from high-quality bronze that was originally sculpted by French object artist Marcel-Andre Bouraine. His signature is also part of this decorative sculpture. Placed on a luxurious marble base, the Art Deco motif shows a stylised version of the goddess Diana, who is the goddess of the hunt and forests in Roman mythology. The iconic huntress, who is depicted as an elegant classic nude, is accompanied by two bolting deer in tasteful brown tones. Shown in a dynamic, graceful pose and armed with a bow, the impressive female figurine is accentuated by a green patina that visually dominates the whole motif. The group of figurines is placed on a graded bronze ground that emphasises the spectacular history of this motif and additionally forms a seamless transition to the marble base. Diana with fawns (1925) is perfectly suited as an impressive decoration in office spaces, hunting rooms or living rooms.

The production of our numerous bronze statues and figurines is subject to strict quality guidelines. All the bronze figurines in our assortment are created via lost wax technique and are cast and refined by hand.

A piece of decorative art - that is at the core of the concept of Art Deco, a style that was especially prevalent during the 1930s. Yet the term is not reduced to only the stylistic elements of the fine arts. Its decorative basic concept was also picked up in the fields of architecture, fashion, furniture, jewellery and everyday objects like cutlery.

Even today, Art Deco sculptures are immensely sought after among collectors. Some of the most important artists of this period were Demétre Haralamb Chiparus (1886-1947), Johann Philipp Ferdinand Preiss (1882-1943) and Marcel-Andre Bouraine (1886-1948).