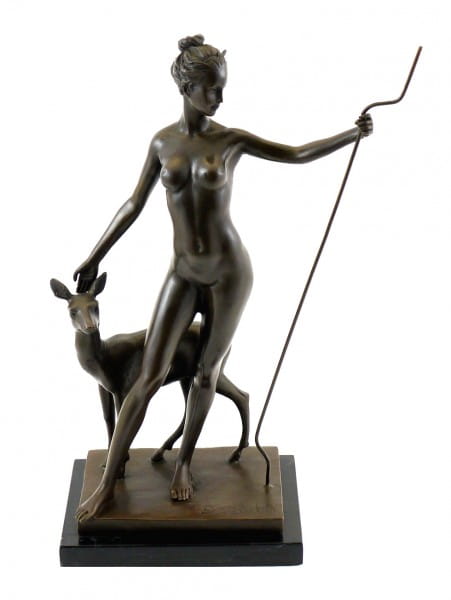 Description Evaluations 0
Description
This bronze figure is a high quality art casting of the figure " Diana and Doe" by... more
Close menu

This bronze figure is a high quality art casting of the figure "Diana and Doe" by Edward McCartan (1923). In Roman mythology, Diana was the goddess of the hunt, the moon, and birthing. Furthermore she was the protector of women and girls. She is associated with wild animals and woodland, and having the power to talk to animals and control them. She was equated with the Greek goddess Artemis. In literature, painting and sculptural art Diana is a popular subject. The figure on the left shows the naked young Diana in its role as a hunter with a deer, on its main she protectively holding her hand. The sculpture is mounted on a marble base and with signed with "E. McCartan".

Like all our products also this article is made of 100 percent bronze. The molten bronze is hand-poured and manufactured in accordance with the most stringent quality criteria. The sculpture is made in the lost wax technique.

Edward McCartan (1879-1947) is an American sculptor who has acquired an international reputation with its elegant bronzes in the 1920s. McCartan was inspired in his artistic creations of the ancient world and especially the figures of mythology. He is considered one of the most important pioneers of American modern art in the 1920s.