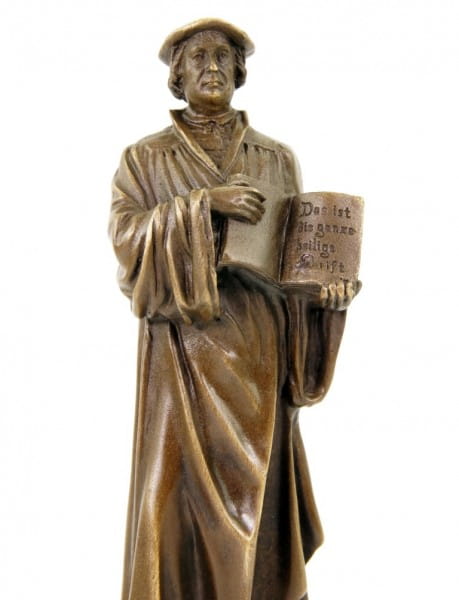 Description Evaluations 0
Description
The word of God became a different one with reformer Martin Luther . The translation of the... more
Close menu

The word of God became a different one with reformer Martin Luther. The translation of the Bible, the New Testament, into a language understandable to the people became one of Martin Luther's revolutionary deeds. Thus, the so-called Luther Bible begins with the words: This is the whole holy Scripture. The bronze figure of Martin Luther depicted here is holding this Luther Bible in his hands, recognisable from the lettering that has just been mentioned. Positioned on a discreet, green marble plinth, the stately figure of the reformer rises. The fine design of the bronze statue, which culminates especially in the detailed elaboration of Luther's face and naturally flowing robes, creates an extremely realistic overall image. Additionally, this Luther figurine bears the signature of the artist.

Martin Luther - theologian, monk, reformer, and founder of a new church. In the first quarter of the 16th century, Luther strongly criticised the sale of indulgences that was common at the time, which eventually led him to publish his 95 theses. Luther translated the Bible and gave central impulses for the founding of today's Christian Protestantism.