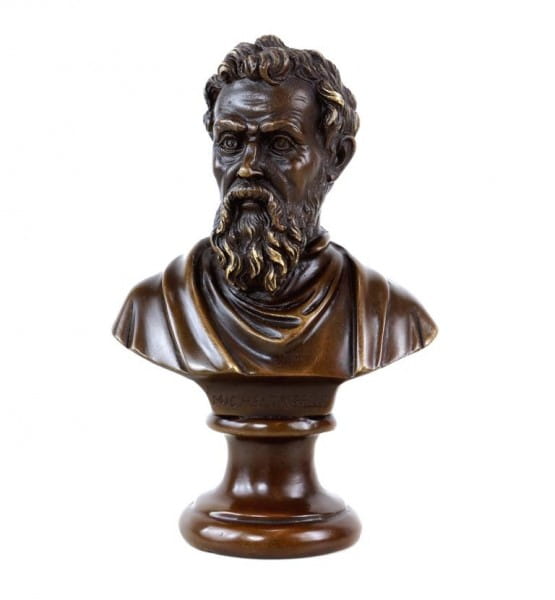 Description Evaluations 0
Description
Michelangelo Buonarroti (1475 -1564) is said to be the most influential artist of the High... more
Close menu

Michelangelo Buonarroti (1475 -1564) is said to be the most influential artist of the High Renaissance period. His virtuoso wall murals and ceiling frescos in the Sistine Chapel in Rome helped to make the Italian painter, architect and sculptor’s artistic heritage immortal. The Creation of Adam is ranked as the most well-known motif of the large-scale ceiling fresco that was created between 1508 and 1512. The bronze bust of Michelangelo is an homage to the Italian artist who dedicated his whole life to the arts. The surface design of the bust is exceptionally detailed and creates an expressive image of Michelangelo. Partial polishings accentuate the exquisite bronze figurine, which is placed on a discreet marble base. There is a fluent transition between the bronze bust and the base, and the sculpture is entitled with Michelangelo on the front. The signature of the artist can be found on the backside of the bust.

Michelangelo spent most of his life in Rome, where he created the wall and ceiling frescos of the Sistine Chapel. However, he did not see himself as a painter, but rather as a sculptor. The opulent sculpture of David that he created in Florence can still be seen in the Galleria dell’ Accademia. Some of his other famous works include the sepulchres of the Medici dynasty in Florence. Discover more bronze busts of famous personalities at Kunst & Ambiente’s bronze shop: Leonardo da Vinci, Martin Luther, Johann Wolfgang von Goethe, Immanuel Kant, Albert Einstein and many more.