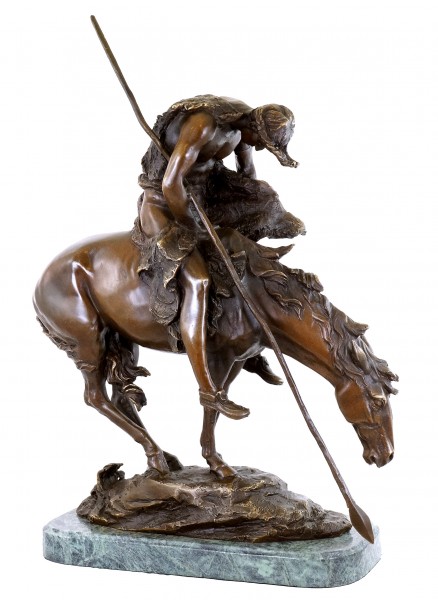 
„The End of the Trail“ is a bronze military figurine that became a well-known symbol of the Wild West. This military statue was created as a monumental sculpture for the Panama-Pacific International Exposition in San Francisco in 1915. There, the figurine received a gold medal as the best sculptural work. The sculpture portrays a Native American and his horse. Both are worn out from a fight that they won. With the end of his spear barely above the ground, the rider can hardly keep himself and his weapon on the horse, which also seems to be at the end of its power.

This sculpture, which is limited to 20 pieces, reminds of the history of Native Americans.


Our bronze products are unanimously created by using the lost wax technique, which guarantees the best results. All of our military statues for sale are made of 100% bronze and are subject to our strict quality guidelines. Every bronze statue is cast by hand.


James Earle Fraser lived from 1876 to 1953. During the first half of the 20th century, he was a successful US-American sculptor. As a child, he lived at the frontier, where he saw how the Native Americans were more and more driven to the West. Those early childhood memories inspired him and numerous of his creations in his later work as a sculptor. He learned his trade at the School of The Art Institute of Chicago. Subsequently, he moved to Paris to attend the École des Beaux Arts and the Académie Julian. He also was the assistant of Richard Bock and Augustus Saint-Gaudens, from whom he learned a lot and later on managed to open his own studio. He created great art and passed on his knowledge at the Art Students League in New York.