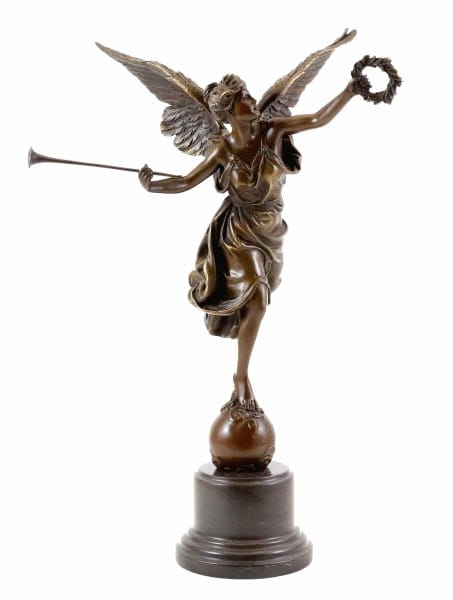 Description Evaluations 0
Description
The bronze figure “La Renomme” of Louis-Ernest Barrias is the allegory of fame, It is the... more
Close menu

The bronze figure “La Renomme” of Louis-Ernest Barrias is the allegory of fame, It is the personification of victory. The winged goddess Victoria is the patron goddess of the Roman emperor and the guardian of the empire. She was normally worshiped by triumphant generals returning from war. Often seen with or in a chariot, as in the late 18th-century sculpture representing Victory in a quadriga on the Brandenburg Gate in Berlin, Germany; "Il Vittoriano" in Rome has two. Winged figures, very often in pairs, representing victory and referred to as "victories", were common in Roman official iconography, typically hovering high in a composition and often filling spaces in spandrels or other gaps in architecture. The sculpture is mounted on a marble base and signed with the artist’s name.

Louis-Ernest Barrias was a French sculptor of the Beaux-Arts school. He started out as a painter, studying under Léon Cogniet, but later took up sculpturing with Pierre-Jules Cavelier as his teacher. His work was mostly in marble, in a Romantic realist style indebted to Jean-Baptiste Carpeaux. In 1878 he was made a knight of the Legion of Honour, an officer in 1881, and a commander in 1900. Barrias was very influenced by the Art Nouveau style, which was prominent in art during the fin-de-sidle in France. The voluptuous women figures used in many of his sculptures are a product of this time and style.