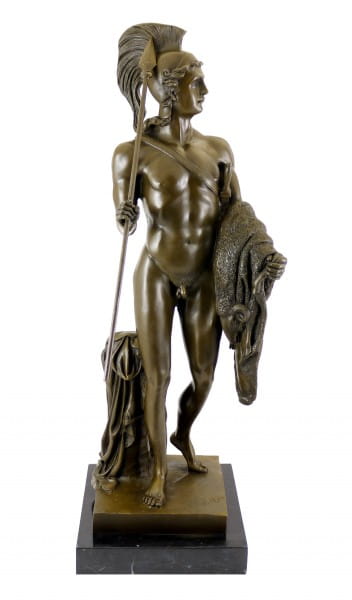 Description Evaluations 0
Description
The original of the reproduction on the left builds the reputation of the Danish sculptor... more
Close menu

"Bronze Statue - Jason with the Golden Fleece - B. Thorvaldsen"

The original of the reproduction on the left builds the reputation of the Danish sculptor Bertel Thorvaldsen. "Jason with the Golden Fleece" was produced in the years 1802 and 1803. The esthetic of the nude figure is inspired by the spear-bearer "Doryphoros". With his larger-than-life statue Thorvaldsen entered the public arena in a spectacular way. Jason is presented in sophisticated balance and heroic nudity, with helmeted head and slung sword he holds on his left arm the Golden Fleece. In his right hand he holds a long spear. The sculpture expresses the gist of the Ancient Greek myth of Jason recounted by the Alexandrian poet Apollonius of Rhodes, about a hero who traveled on a voyage in search of the Golden Fleece in an attempt to help his father recover his kingdom from King Pelias.

As all of the bronze products in our shop, this exhibit is made in the lost-wax-casting process. All our products satisfy strict quality guidelines. The sculpture is made of 100 percent finest bronze.

The Danish sculptor Bertel Thorvaldsen (Thorwaldsen) was born on November 19, 1770 in Copenhagen. He died on March 24, 1844 at the age of 73 years. His father worked as an Icelandic wood carver. So Bertel Thorvaldsen got the first art lessons by his father. At the age of eleven years he attended the school of the Royal Academy of Arts. In 1787 he received a silver medal for works of modelling. In 1789 he got the next silver medal for the relief “Resting Cupid”. Bertel Thorvaldsen received benefits to continue his study. In 1793 he gained a travel grant for a triannual stay in Rom.