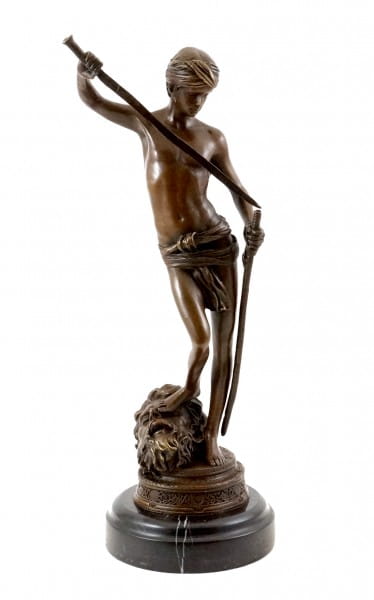 The sculpture depicts a victorious David resheathing his sword after slaying Goliath, whose head lies on the ground beneath David's foot. The artwork was originally sculpted by the French artist Marius-Jean-Antonin Mercié. For David Vainqueur, also known as David After the Combat, Mercié earned a Medal of the First Class and the Croix de la Légion d' Honneur. A casting was commissioned by the French state and exhibited at the 1873 World Exhibition. Today, this example can be found in the Musée d'Orsay in Paris. The sculpture is signed "A. Mercie".

Like all of our bronze items also this sculpture is hand-poured and fulfils strict quality guidelines. The sculpture is made using the lost-wax technique. All of our products are made of 100% bronze.

Antonin Mercié (1845-1916) was a French sculptor and painter. Around 1870, he embodies the emerging French sculptor generation that wants to give the sculptures a moving dimension within the framework of classical theory. He went back to the great models of the Florentine Renaissance and combined virtuoso construction with powerful design. Mercié found an independent way between classicism and realism.