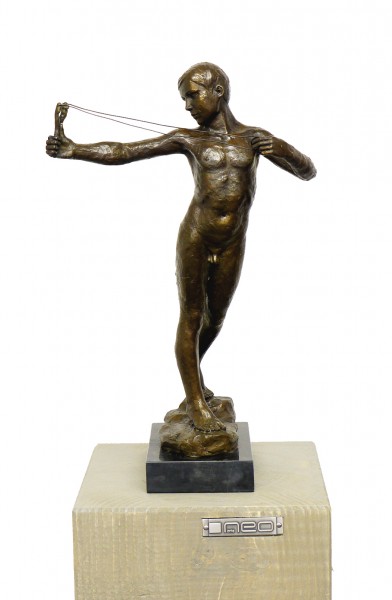 Description Evaluations 0
Description
"Slingboy" or also known as "The Catapult" is a sculpture that was originally... more
Close menu

"Slingboy" or also known as "The Catapult" is a sculpture that was originally created by the Scottish sculptor William Reid Dick, who was born in 1879 in Glasgow and died in 1961 in London, England. The bronze sculpture that is known under two different names is showing a young, nude male who is aiming his catapult at a target. Slingboy is an attractive Art Nouveau exhibit that was made during the early 1920th century. The sculpture impresses its viewers, due to the noble material as well as the filigree and very detailed surface of the male nude. “The Catapult” is standing with a turned hip on top of a solid base made of marble and was perfected by the signature of the artist Stevens.

The Scottish sculptor Sir William Reid Dick was born in Glasgow in 1879 and started his education at a stone-cutter at the age of twelve. At the same time he attended art glasses at night for learning painting as well as the techniques of modelling. Because Dick was very, very talented he also recieved a lot honour during his lifetime. In 1935 he was knighted by King George V (* June 3, 1865; † January 20, 1936). Starting in 1938 until his death, the sculptor Sir Dick was working as "Sculptor in Ordinary for Scotland" under the reign of King George VI (* December 14, 1895; † February 6, 1952).