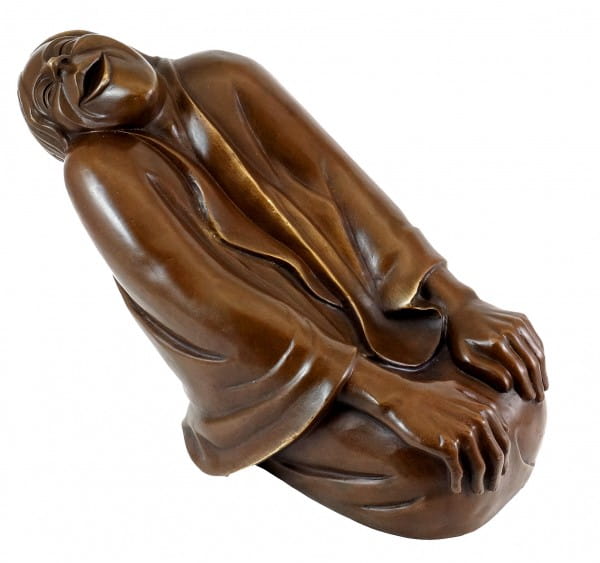 The Bronze Sculpture Laughing Old Woman is one of Ernst Barlach’s signature pieces. Together with his Freezing Old Woman (also created in 1937), the sculpture represents the overall intention of Barlach’s artistic career. Being full of contrasts on the outside, both Contemporary Sculptures demonstrate original feelings of the human psyche in different ways. Originally, Laughing Old Woman was created out of walnut wood.

The motif shows a rocking elderly woman full of joy who despite her frailty radiates an air of vitality and satisfaction. For the moment, she seems to be free from the burden and melancholy of the past. Laughing Old Woman is a late work of Barlach which is nonetheless crucial for his overall work and whose implementation of human emotionality is characterised by its individuality and multifacetedness.

Laughing Old Woman is only available in an exclusive, limited edition of 20 items, which are numbered individually and furnished with the adopted signature - E. Barlach - of the original piece.

The production of our bronze statues is subject to strict quality guidelines. Our whole selection of bronze statues has been produced by using the lost wax technique and has been cast by hand. Therefore, we can guarantee you a high standard of quality of all of our products, including Contemporary Sculptures for Sale, Abstract Art for Sale, Bronze Statues and Figurines.

Regardless whether you are looking for Sculptures or Bronze Statues, we are providing a wide selection of Abstract Art and Sculptures for Sale. All Sculptures, Art and Bronze Statues are manually checked for quality and they are delivered to UK, Europe and worldwide.

His talent for plastic arts and for languages had already been recognised and fostered during his early childhood. Ernst Barlach studied at Hamburg’s School of Arts and Crafts until 1891, which was followed by his time at Dresden’s Academy of Arts, where he stayed until 1895 and became the master student of the famous sculptor Robert Diez. After returning to his home city in 1901, his creative career began a bit slowly in the beginning. After a trip to Russia in 1906, the impressions of Russian folk art began to have an impact on his works. One year before his death, the artist had to bear the labelling of his works as “degenerated art” by the Nazis. As a consequence, all of his works were banned from the public sphere. Nowadays, however, Barlach is said to be one of the most influential German sculptors in the history of art.