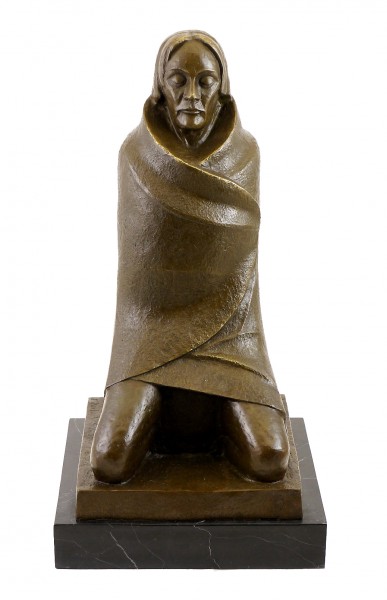 Description Evaluations 0
Description
"The Ascetic (Praying Man)" is a sculpture designed by Ernst Barlach in 1925. It shows a man... more
Close menu

"The Ascetic (Praying Man)" is a sculpture designed by Ernst Barlach in 1925. It shows a man with closed eyes in a praying position, wrapped in a cloak on a marble base. In spite of his closed eyes it seems as if he were looking to God and addressing his prayer to him in a contemplative mood. His gaunt figure corresponds to an ascetic, a celibate human being. The bronze figure is signed with E. Barlach.

Like all of our bronze items also this sculpture is hands poured and satisfies strict quality guidelines. The sculpture is made in the lost wax technique. All of our products are made of 100 percent bronze.
Ernst Barlach (1870-1938) is considered as one of the most important sculptors of German Expressionism. He earned much recognition for its wooden sculptures and bronzes. Moreover, he has bequeathed a large varied repertoire of prints, drawings and literature. In 1925, the same year in which he designed the "Ascetic", Barlach became an honorary member of the Academy of Fine Arts in Munich. About 400 of his works were declared "Degenerate Art" by the Nazis and removed from public collections. Some of his works were presented posthumously at the documenta (1955) and documenta III (1964) in Kassel.