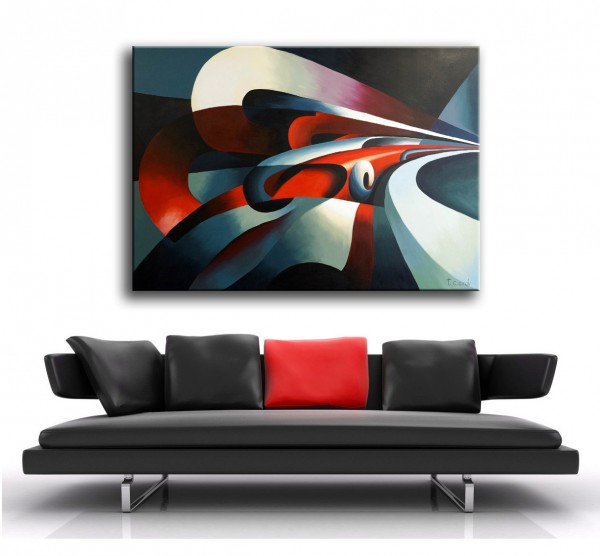 Description Evaluations 0
Description
"Le forze della curva" – in English: The Forces of the Curve – is a particularly... more
Close menu

"Le forze della curva" – in English: The Forces of the Curve – is a particularly intense oil painting by the Italian Futurist Tullio Crali. Depicted is a multicoloured curve, consisting of several panels. The picture glorified the momentum of the movement; Crali has tried impressively to give a presentation of tempo and dynamics. Like other Italian futurists in his day Crali deals in "Le forze della curva" with the worship and visualization of the velocity. The Italian Futurism is characterized by harried and abstract painting style, which is able to reproduce the modern life, which is characterized by mechanization. The adjoining replica of "Le forze della curva" is signed at the bottom right with "t. c. crali ".

All of our paintings are hand-made acrylic paintings or oil paintings and were produced in limited numbers. Because each painting is a hand made single item, small deviations to the painting on the left are possible at delivery.

Tullio Crali (1910-2000) was an Italian artist associated with Futurism. A self-taught painter, he was a late adherent to the movement, not joining until 1929. He is noted for realistic paintings that combine "speed, aerial mechanisation and the mechanics of aerial warfare", though in a long career he painted in other styles as well. In 1928 Crali flew for the first time. His enthusiasm for flying and his experience as a pilot influenced his art. In 1929, through Sofronio Pocarini, he made contact with Marinetti, the founder of Futurism, and joined the movement. In the same year aeropittura was launched in the manifesto, Perspectives of Flight, signed by Benedetta, Depero, Dottori, Fillia, Marinetti, Prampolini, Somenzi and Tato. Despite his relative youth, Crali played a significant part in aeropittura. His earliest aeropitture represent military planes, “Aerial Squadron and Aerial Duel” (both 1929). In the 1930s, his paintings became realistic, intending to communicate the experience of flight to the viewer. His best-known work, “Nose Dive on the City” (1939), shows an aerial dive from the pilot's point of view, the buildings below drawn in dizzying perspective.