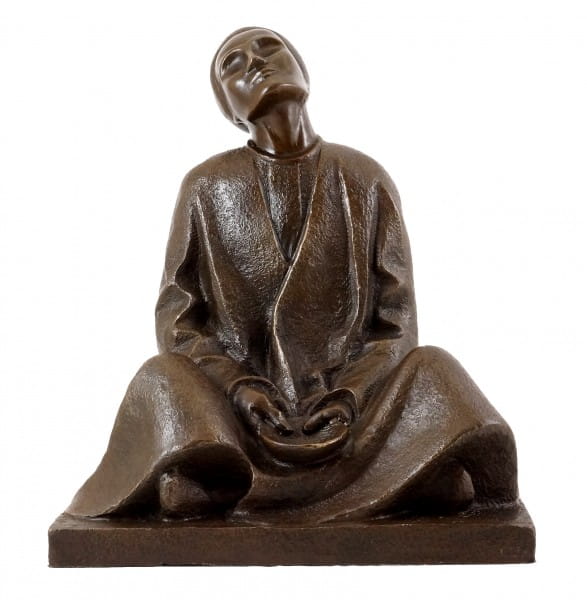 Description Evaluations 0
Description
This bronze sculpture is one of the famous beggar figures of the German sculptor Ernst... more
Close menu

This bronze sculpture is one of the famous beggar figures of the German sculptor Ernst Barlach. It bears the title "Blind Beggar". In 1909 Max Adolf Pfeiffer (1875-1957) founded the Schwarzenburger workshops for porcelain art in Unterweißenbach. Besides Gerhard Marcks and Paul Scheurich, Ernst Barlach also provided models. Barlach worked from 1902 to 1906 in Berlin with the ceramist Richard Mutz. Here were created the templates for six models which were formed in the Schwarzenburger workshops from 1909 to 1913, including the "blind beggar". Only the drapery of the shirt under the jacket is gone. The beggars’ characters created by Barlach reflect the impressions of his summer trip to Russia resists from 1906. Barlach’s art works deal with the social hardship of people in Russia.

The bronze sculptures are made with the help of the lost-wax casting. The objects are done in hand-work. Strict quality instructions are very important for a high quality. So we care for the compliance.

Exclusive limited edition of 20 copies, individually numbered and signed with the artist's name

Ernst Barlach (1870-1938) is one of the most famous sculptors of German Expressionism. Mainly by its wooden sculptures and bronze sculptures Barlach made ​​a over Germany's borders beyond name. Besides his sculptures, he rejects a diverse repertoire of works printed graphic, draughtsman ship and literary style. The sculptor was ostracized and persecuted by the Nazis. Hundreds of his works were confiscated as "degenerate art". Although radically isolated from his audience, he was highly regarded in professional circles.