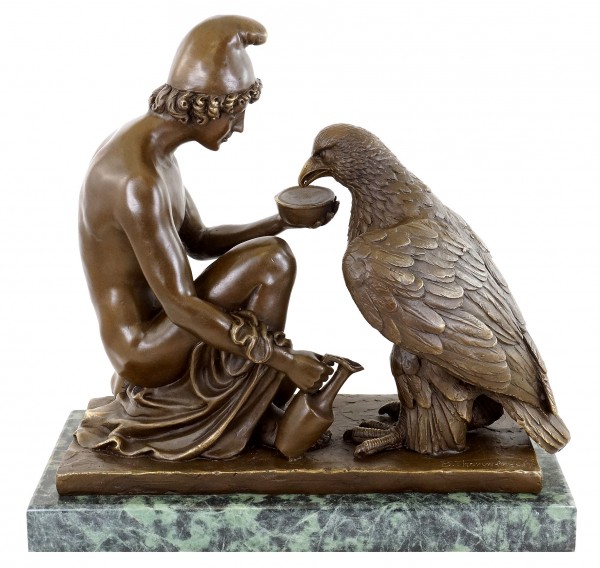 This Greek mythology statue depicts the homoerotic relationship between Zeus and Ganymede. Ganymede is the son of Trojan king Tros and was the most beautiful of all mortals in mythology. Zeus loved him and appeared to him as an eagle. Ganymede watered the trusting eagle. Zeus took the chance and abducted the youth to Mount Olympus. There, he was supposed to work as a servant indefinitely. Full of love, Zeus lifted Ganymede up to the stars, where he can still be seen as the sign of Aquarius. This Greek statue shows the moment of the first encounter between Ganymede and Zeus. This work is limited to 20 pieces.

Like all of the other Greek statues for sale in our shop, this Greek God statue is cast by hand and is subject to our strict quality guidelines during its creation. Additionally, all the sculptures for sale are produced by using the lost wax technique.

Bertel Thorvaldsen lived from 1770 until 1844 in Copenhagen. Although the Danish sculptor spent a long period of time in Rome, he was nonetheless an active protagonist of the Golden Age in Denmark. As the son of a wood carver, statuary art was more or less a given for him. His first artistic training was given to him by his father. Due to this early promotion of his talents, he became a student at the Free School of the Royal Danish Academy of Art during his youth. He received several awards for his works which helped him pay for his art studies. His success led to him staying in Rome for several years, where he began his very animated artistic career which was coined both by big successes as well as some misfortunes.