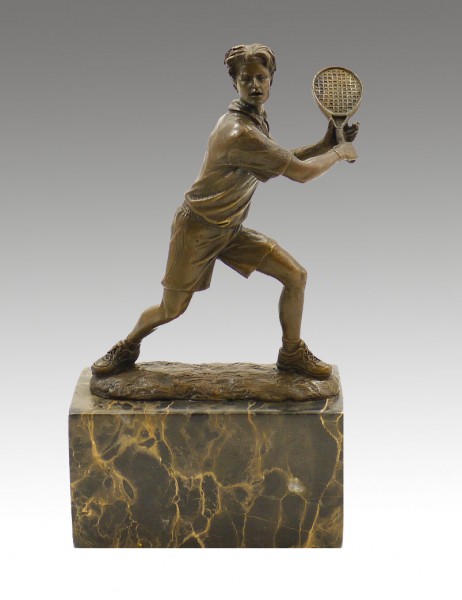 Description Evaluations 0
Description
“Tennis Player” is a bronze trophy, set on a marble plinth, that has been created by Milo and... more
Close menu

“Tennis Player” is a bronze trophy, set on a marble plinth, that has been created by Milo and it displays a young tennis player playing a match. The monochrome bronze sculpture has been made of 100% finest bronze, lavishly by hand. The result of this special work is detailed, realistic and sportive bronze, which portrays the dynamics of tennis and gives a realistic image of this interesting discipline. Both the young player’s clothes and the equipment are captivating with their filigree creating and lots of detail, that make the sculpture a realistic portray. The sports trophy is set on a marble plinth, which stresses the high quality appearance if the cup. The ashlar shaped base produces an interesting contrast to the sportive movements of the tennis player. The realistic-modern sports trophy contains the signature of its creator Milo on the small bronze plate on which the young athlete stands.

The Portuguese artist Milo is a master of sculpture, famous for the creation of countless Modern Art figures and the manufacturing of nude and animal sculptures. He was born on June 12, 1955 in Lisbon, the beautiful capital city of Portugal, as the son of an art dealer and already discovered early that he had a passion for art. After he finished school, Miguel Fernando Lopez turned this passion into a profession, studying at the University of Lisbon sculpture and art. During study visits to Rome and Venice he learned about the life and art in the cities and was inspired by the impressions and experiences he made. Already while he studied, the artist specialized in the creation of animal and nude sculptures and Modern Art figures and the sculpture “Tennis Player” is an example of Milo’s great Modern Art works. Tennis is a popular discipline which can be played between two players (single) or between two teams of two players each (double). In the past, tennis was recognized as an elitist sport, but today it is a famous and popular sport. Professional players prove their talent in the four Grand Slam tournaments: Australian Open, French Open, Wimbledon and the US Open. The German tennis player Boris Becker won the tournament of Wimbledon in 1985 as the youngest winner in the history of the tournament. Altogether he won 49 tournaments in his career. Besides the great Boris Becker the German female tennis player Steffi Graf is well-known as one of the best tennis players in the world. She won 22 Grand Slam tournaments and was ranked as number one in the ATP ratings for 377 weeks.