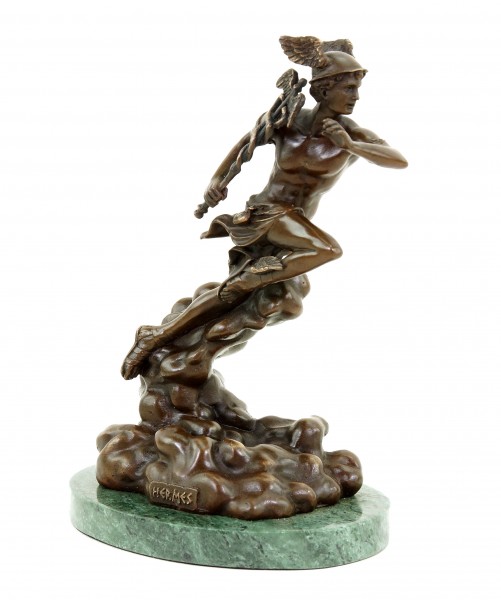 Description Evaluations 0
Description
This Greek bronze statue depicts Hermes , messenger of the gods, who seems to be running on... more
Close menu

This Greek bronze statue depicts Hermes, messenger of the gods, who seems to be running on clouds, possibly to proclaim an edict of Zeus, the father of the gods. The clouds serve as a transition to the grey marble base on which the detailed bronze statue by Giambologna is placed. In accordance with his mythological role, the character of Hermes carries several of his distinguishing features on him. Thus, the god, who is portrayed as an athletic young man, wears winged shoes on his feet as well as his winged traveller’s hat and his caduceus, which rounds off the decorative motif. There is a discreet name at the statue’s base that gives this mythological sculpture its finishing touch. Additionally, the statue bears the signature of the artist.

All of our bronze figurines and sculptures are produced via the so-called lost wax technique. Constant surveillance of our production process guarantees the high quality of our products.

Hermes, the messenger of the gods, is a character in Greek mythology who, among other things, leads the souls of the dead into Hades and announces the rulings of Zeus. Traditionally, Hermes is depicted exactly like this beautiful bronze sculpture — as a young and beardless man.