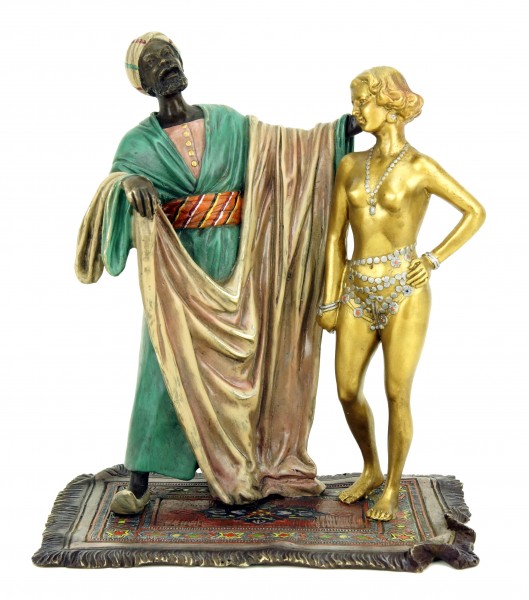 Description Evaluations 0
Description
This Viennese carpet bronze tells the tale of a slave trader in the distant Orient. This... more
Close menu

This Viennese carpet bronze tells the tale of a slave trader in the distant Orient. This intricately crafted bronze figurine is characterised by its detailed depiction that is most apparent in the area of the surface design and the hand-painted details. Endowed with the Bergmann stamp, this carpet bronze presents a classic motif of the Vienna bronze period — a snapshot of the Far Eastern culture of bygone times. In this instance, a slave trader in long flowing robes advertises his wares. In this case, his ware is a young and naked lady that is only clad in a few jewellery pieces and is up for sale. Moreover, the erotic nude sculpture is accentuated by its striking colours, particularly when it comes to the beautiful slave that is almost completely covered in gold.

Our bronze figurines are created in an elaborate process that features a lot of different stages of production. Our main production technique is the so-called lost wax technique, which is a tried-and-tested method when it comes to the production of bronze statues.