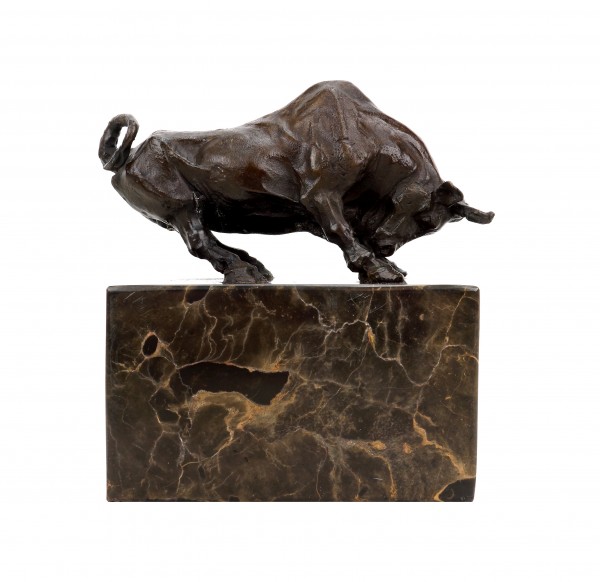 Description Evaluations 0
Description
Due to his extensive focus on the anatomy of animals, Antoine-Louis Barye became one of the most... more
Close menu

Due to his extensive focus on the anatomy of animals, Antoine-Louis Barye became one of the most important animal sculptors of the 18th century. His studies of the movement patterns and facial expressions of animals in Paris’ Jardin de Plantes are reflected in the masterly realised bronze figurines and sculptures of the artist. In the case of this small sculpture, the focus is on the dynamism of the depicted moment: a massive, muscular bull that is getting ready to attack, his head menacingly lowered to the ground. This decorative bull figurine does not only stand for the imposing style of the artist, but also for values like dominance, strength and masculinity, which are definitely embodied by this bronze bull. A coloured marble base rounds off the final refinement of this bronze.

The production of our bronze figurines is subject to strict quality guidelines. Every sculpture is cast and refined by hand. All of the bronze figurines in our assortment are created via the use of the lost wax technique.

Antoine-Louis Barye (1795-1875) is known for his virtuoso animal depictions full of power and momentum. The romanticist often used the interplay between light and shadow, which breathed life into his sculptures and paintings. Some of his most influential works include Lion and Serpent, Eating Lion and Fighting Stags. Discover more bronze animal figurines in our bronze shop.