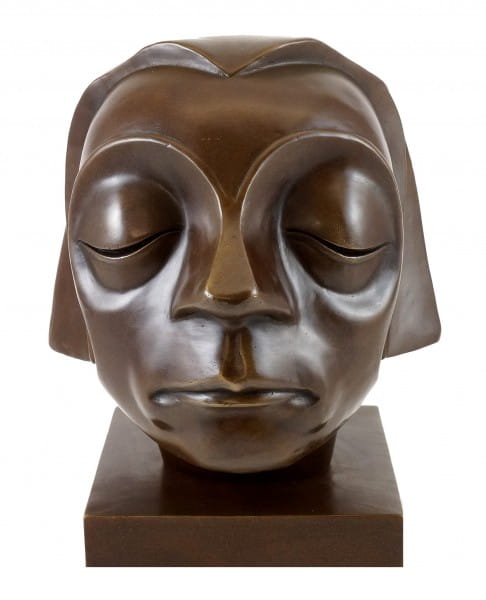 The "Head of the Güstrow Memorial" testify a deep artistic friendship. The facial features are clearly those of his artist friend Käthe Kollwitz, although "without intention", as he later maintains. This head is a detail of Barlach’s most famous artwork "The Floating" (1930). "The Floating" was created as a war monument for the victims of the First World War and hung from 1927-1937 in a niche of Güstrow Cathedral. Barlach’s work as well as the work of Käthe Kollwitz in Nazi Germany was ostracised during Nazi-reign. So in retrospect the "Head of the Güstrow Memorial" acts like the premonition of a common destiny. The sculpture is signed with "E. Barlach".The figure was cast in bronze using the lost wax method. All of our sculptures are created under strict quality guidelines. Based on our quality control system we only create high value products, which stand out for their precision.

Exclusive limited edition of 20 copies, individually numbered and signed with the artist's name.
Ernst Barlach (1870-1938) was a famous sculptor as well as a writer. Already during his lifetime the equivalence of his talents caused admiration. Today he is primarily known for its wood and bronze sculptures. He created a rich oeuvre of prints, drawings and literature. In 1925 Barlach became an honorary member of the Academy of Fine Arts in Munich. More than 400 of his works were declared by the Nazis as "Degenerate Art" and removed from public collections. Some of his works were shown at the documenta posthumously (1955) and documenta III (1964) in Kassel.