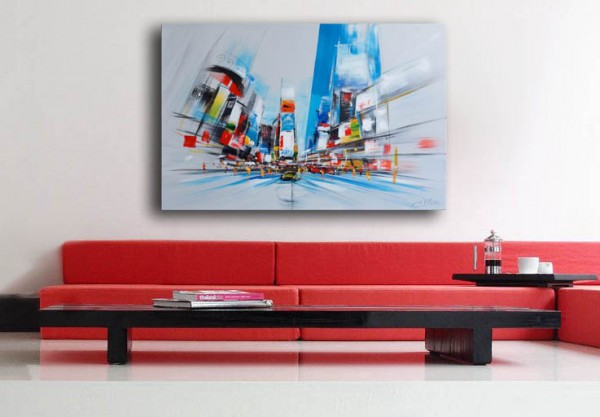 Description Evaluations 0
Description
"Modern Visions" is the title of the oil painting on the left. It was designed by the Saxon... more
Close menu

"Modern Visions" is the title of the oil painting on the left. It was designed by the Saxon artist Martin Klein. The painting conveys the impression of a flying snapshot; it seems as it had been photographed from a passing car. Times Square is famous for its many neon signs. The bright colors of that place are also reflected in Klein's painting "Modern Visions", which is signed at the lower right corner with "M. Klein". Times Square in New York City is located at the intersection of Broadway and Seventh. Brightly adorned with billboards and advertisements, Times Square – iconified as "The Crossroads of the World", "The Center of the Universe", and "The Great White Way" – is the hub of the Broadway Theater District, one of the world's busiest pedestrian intersections, and a major center of the world's entertainment industry.

All of our paintings are hand-made acrylic paintings or oil paintings and were produced in limited numbers. Each is signed by the artist Martin Klein. Because each painting is a hand made single item, small deviations to the painting on the left are possible at delivery.