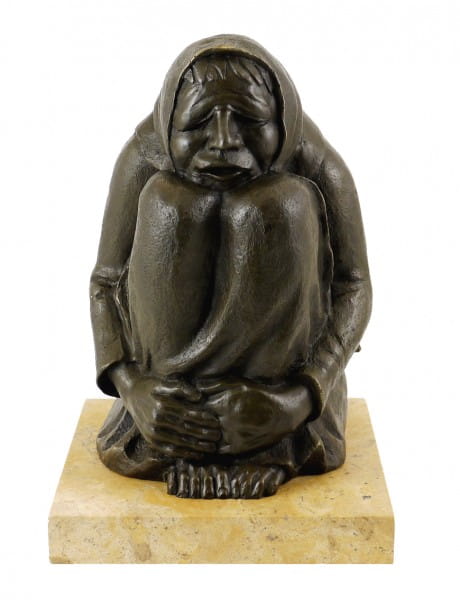 Description Evaluations 0
Description
The “Freezing Crone” by Ernst Barlach is one of the most memorable testimonies of isolation,... more
Close menu

The “Freezing Crone” by Ernst Barlach is one of the most memorable testimonies of isolation, the sculptor felt both artistically and socially. The sculpture was created in 1937, one year before his death. For the German sculptor, writer and artist Ernst Barlach the year 1937 was marked by uncertainty and existential threat. The Nazis seized 371 of his works and imposed him with an exhibition ban. The sculpture group “Christ and Thomas” were shown at the exhibition “Degenerate Art”. Works from this period, including the “Freezing Crone” reflects its situation within society, the sentiment of rejection, the experienced hatred and contempt. Barlach’s beggar figure bears the original signature.

Barlach’s bronze sculpture was produced with the lost wax method. This a complex process with many manual stages of work. All the products from our factory are subject to the strict quality regulations.

Ernst Barlach (1870-1938) was a famous sculptor as well as a writer. Already during his lifetime the equivalence of his talents caused admiration. Today he is primarily known for its wood and bronze sculptures. He created a rich oeuvre of prints, drawings and literature. In 1925 Barlach became an honorary member of the Academy of Fine Arts in Munich. More than 400 of his works were declared by the Nazis as "Degenerate Art" and removed from public collections. Some of his works were shown at the documenta posthumously (1955) and documenta III (1964) in Kassel.