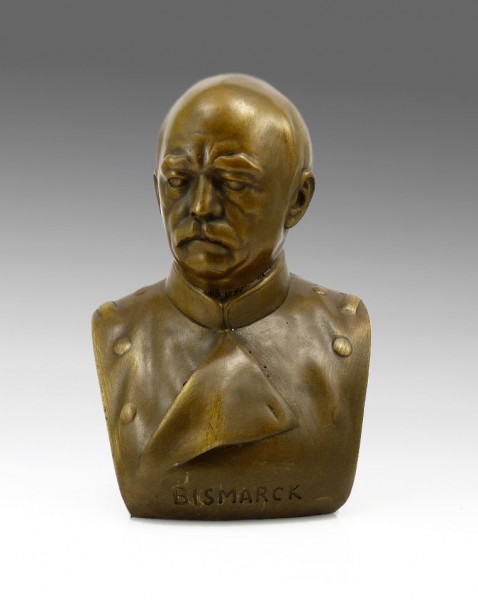 This relatively plain Military bronze bust of the well-known German Reich Chancellor Otto von Bismarck was cast in the famous foundry of Hermann Gladenbeck in Berlin and is, of course, signed by this renowned founder. The bust is made of 100% bronze and mirrors Otto von Bismarck’s facial lines perfectly, even though it is not very detailed. It is a must-have for lovers of history and political figures. It emits strength, power and intelligence, so that the sculpture is surrounded by an atmosphere of nostalgia and majesty.

The Reich Chancellor Otto von Bismarck is probably one of the most famous European strategists of the 19th century. It is owned to him and his politics that many European nations – including France, Italy and Russia – have co-existed peacefully for many years. Otto von Bismarck was born on April 1, 1815 in Schönhausen and died on July 30, 1898 near Hamburg. Bismarckwas not only prime minister of Prussia, but also Federal Chancellor of the North German Confederation, and mainly responsible for the founding of the German Reich. He was dismissed by the last Emperor of the German Reich, William II.