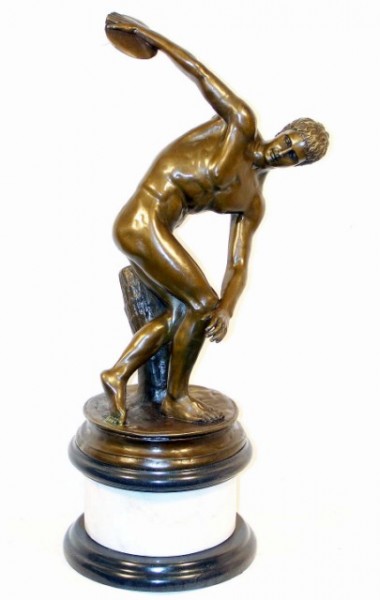 Description Evaluations 0
Description
This sculpture was once made after the great artist and sculptor Myron and is called... more
Close menu

This sculpture was once made after the great artist and sculptor Myron and is called "Discobolus". The sculpture is a stunning image of a Greek athlete, throwing a discus. "Discobolus" was originally completed between 460-450 BC. It is an image of a young and athletic male, affixed on a sold marble-base. The sculpture is signed by Myron and was casted as detailed and as filigree as possible in comparison to the original. The mythology bronze sculpture shows a nude male doing sports, because the discus thrower was always naked in ancient times. While the original of the sculpture wasn't made of bronze, our fantastic re-cast is made of finest bronze.


This nice mythology bronze is signed by Myron. The discus thrower is an image of one of the most important things of the archaic world: Doing sports. The creator of this sculpture, Myron, was living in the 5th century BC but the exact dates of life are unknown. The discus throw was known as an event in ancient times, in which mostly male athletes throw heavy discs, called discus. The discus throw was part of the ancient pentathlon, at least dated back to 708 BC. In 1896 the discipline was part of the first Olympiad, the Summer Olympic Games.