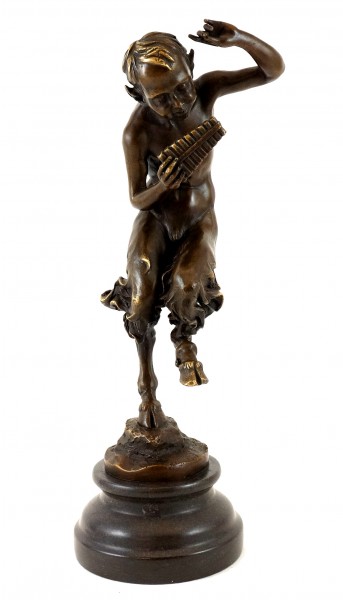 The adjoining "Dancing Satyr with panpipe" was designed by the French artist Jules Jacques Labatut. In Greek mythology a satyr is one of a class of lustful, drunken woodland gods. In Greek art they were represented as a man with a horse’s ears and tail, but in Roman representations as a man with a goat’s ears, tail, legs, and horns. Satyrs are, as here, often presented and reproduced as dancing gods. The sculpture is mounted on a multistage, circular marble base and bears the signature of the artist.

Jules Jacques Labatut (1851-1935) was a French sculptor. He attended the École des Arts, where he was a pupil of Latger and Gorse as well as Maurette and Auger. In 1875 he went to Paris and studied at the École nationale supérieure des beaux-arts under François Jouffroy and Antonin Mercié. He created reliefs, character constellations, allegorical statues in bronze and marble, and portrait busts. In 1881 he was awarded the Prix de Rome. Many of his sculptures were exhibited in the Paris Exhibition of 1889. In 1894 he was awarded the Legion of Honour.