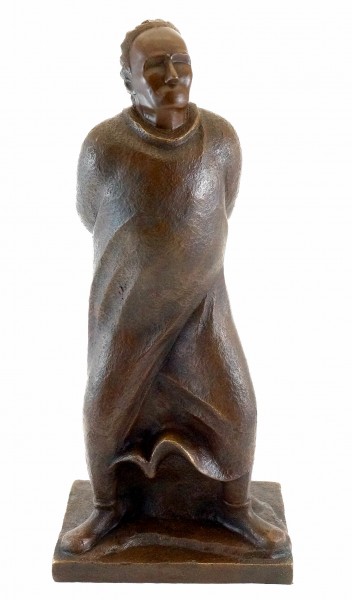 Ernst Barlach’s work is a mystical interpretation of life as man’s lonely search for himself, for others, and for his lost God. A search beset by invisible presences which emerge, as visible artistic form from an unknown darkness within the artist’s consciousness. “The Walker” on the left was created in 1912; it is a typical work of his artistic oeuvre.The art object is also signed by Ernst Barlach himself, adding a beautiful finishing-touch to the figure.

The figure was casted in bronze using the lost wax method. All of our sculptures are created under strict quality guidelines. Based on our quality control system we only create high value products, which stand out for their precision.

Exclusive limited edition of 20 copies, individually numbered and signed with the artist's name!

Ernst Barlach (1870-1938) was a famous sculptor as well as a writer and already during his lifetime the equivalence of his talents caused admiration. Today he is primarily known for his wood and bronze sculptures. He created a rich oeuvre of prints, drawings and literature and in 1925, Barlach became an honorary member of the Academy of Fine Arts in Munich. More than 400 of his works were declared by the Nazis as "Degenerate Art" and removed from public collections. Some of his works were shown at the documenta posthumously (1955) and documenta III (1964) in Kassel.
Height: 51 cm
Width: 22 cm
Depth: 15 cm
Weight: 6.7 kg
100 % bronze
Related links to "The Walker (1912) - Ernst Barlach - Bronze Statue"
Evaluations 0
Read, write and discuss reviews... more
Close menu
Customer evaluation for "The Walker (1912) - Ernst Barlach - Bronze Statue"
Write an evaluation
Evaluations will be activated after verification.