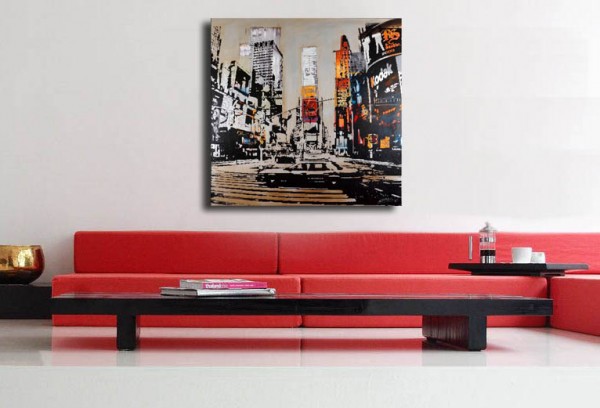 Description Evaluations 0
Description
The picture on the left is a stencil print by Martin Klein. Depicted is the Times Square, the... more
Close menu

The picture on the left is a stencil print by Martin Klein. Depicted is the Times Square, the busiest place in New York City. Times Square is known for its many Broadway theaters, cinemas and electronic billboards. It is one of those places that make New York a city that never sleeps. Times Square is a major commercial intersection and a neighborhood in Midtown Manhattan, New York City, at the junction of Broadway and Seventh Avenue and stretching from West 42nd to West 47th Streets. The painting is signed at the lower right with the name of the artist.

Martin Klein (born 1979) is a young painter and sculptor from Saxony, Germany. Klein grew up in a solid parents` home in Bischofswerda. His father works as a craftsman and early discovered Klein`s artistic interest. During his Australian visit, he decided to devote more attention to the art. In Dresden he worked alongside painting with the creation of three-dimensional art objects. He studied art at the Academy of Fine Arts and worked in an art gallery, to finance his second degree. He produces modern, sometimes humorous sculptures. His abstract art paintings depicting mainly landscapes and modern woman acts are characterized by unexcited color designs. Its various acrylic mixing and filling techniques give his works a distinctive character.