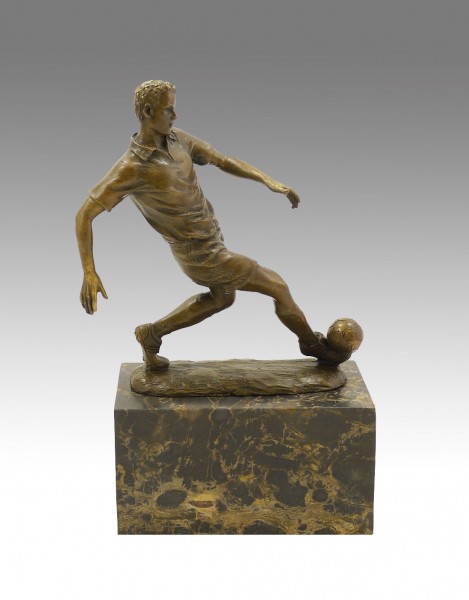 This perfectly designed bronze sports trophy was created by the famous Portuguese artist and sculptor Milo and carries the title „The Football Player“. The sculpture, which is made of 100% finest bronze, shows a young football player in the middle of playing a match with the football at his feet. The special characteristics of this cup are the realistic representation of the young talented boy and the filigree and detailed design of his clothes and the football. The sculptor Milo has captured a moment of highest concentration, just before the player shoots to score a goal. With its dynamic and realistic portrayal the cup is a great eye-catcher for each collection of sportive bronzes. Milo has placed the scene on an ashlar shaped plinth of dark marble, which makes the trophy a synthesis of the arts. The static marble base produces a great contrast to the dynamic figure of the football player, which also contains the signature of its creator Milo at the small bronze plate.

The Portuguese sculptor Milo is one of the most famous artists of the present time, he has specialized himslef in the creation of Modern Art, animal sculptures and nude figures. He was born in 1955 in Lisbon, the wonderful capital city of Portugal, and developed an early passion for art. He decided so study art and sculpture at the University of Lisbon and already made his first works of Modern Art and nude sculptures whilst he was studying. After Miguel Fernando Lopez graduated from university, he became a great freelance artist who works throughout Europe. Also the bronze trophy “The Football Player” is a work of Milo. Football or soccer is a team sport that is popular all over the world. The aim for the two teams is to score goals in a match. Therefore they have to shoot a ball, the football, into the goal at the opponent’s side. The general rule number one, is that a match is played 45 minutes a-side, If there is no clear result at the end of the 90 minutes, the match will be extended. When even after the extension there is no winner, the match will be decided in a penalty shoot-out. The world’s greatest competition is the FIFA World Cup that is awarded every four years. In the Word Cup national teams of the attending nations compete for the title to be world champion. The German national football team have won the FIFA World Cup four times yet (1954, 1974, 1990 and 2014), whereas the female German national football team is one of the most successful teams in the world; it has won the FIFA World Cup two times and the UEFA European Football Championships nine times. The most famous football team is Real Madrid. They won the UEFA Champions League twice and the UEFA Europe League twice.