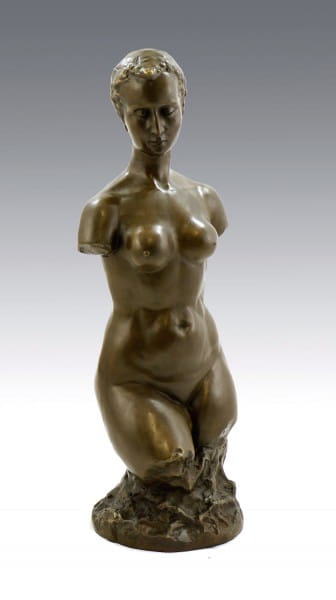 Description Evaluations 0
Description
This Modern Art Sculpture with the title “Small Female Torso” was made after an idea of the... more
Close menu

This Modern Art Sculpture with the title “Small Female Torso” was made after an idea of the famous German sculptor and graphic designer Wilhelm Lehmbruck. The sculpture was executed in 100% bronze and is – like the original – also known as „Hagener Torso“. The original version of „Small Female Torso“ was executed in 1910 by Lehmbruck. But the artist Lehmbruck didn’t originally used bronze; he created his sculpture of stone. Even most of the sculptures made by the artist are known as parts of other sculptures, this one is a single executed sculpture. While creating his sculpture „Hagener Torso“ Lehmbruck focused on creating a modern and lightly abstract sculpture of a female torso without arms and legs but with a small head. The head of this modern art object is not just kind of small, it is also a very young version of a female head, while the torso itself looks very female and more like the torso of an adult. The bronze sculpture was set on a little rock made of bronze and was signed with the signature „W. Lehmbruck“. Another feature of this sculpture is the depiction Lehmbruck used to create this sculpture; this sculpture is characterized by the same anonymity like all the other sculptures of the sculptor.

The German sculptor and graphic designer Wilhelm Lehmbruck was born on January 4, 1881 in a town called Meiderich. Meiderich is situated close to Duisburg and Düsseldorf. In Düsseldorf Lehmbruck attended the Art Academy and studied under Karl Jansen (* May 29, 1855; † December 2, 1927).  The sculptor Lehmbruck was known as one of the most important artists of the first half of the 20th century. Lehmbruck became a member of an art association of Düsseldorf and a member of the Société Nationale des Beaux-Arts. Even the artist Lehmbruck was a successful sculptor, married and a father of two children he committed suicide on March 25, 1919 in Berlin. The descendant’s estate of Lehmbruck is exhibited in Germany at the Lehmbruck-Museum in Duisburg as well as at the United States of America at the Museum of Modern Art in New York. The German Lehmbruck-Museum was once designed by his son Manfred Lehmbruck (* July 13, 1913 in Paris; † November 26, 1992 in Stuttgart). The artwork Lehmbruck created was always characterized by an expression of sorrow as well as by anonymity. Some of his best known sculptures are “Sitting Boy” (1910), “Mother with Child” (1907) and “Kneeling Woman” (1911).