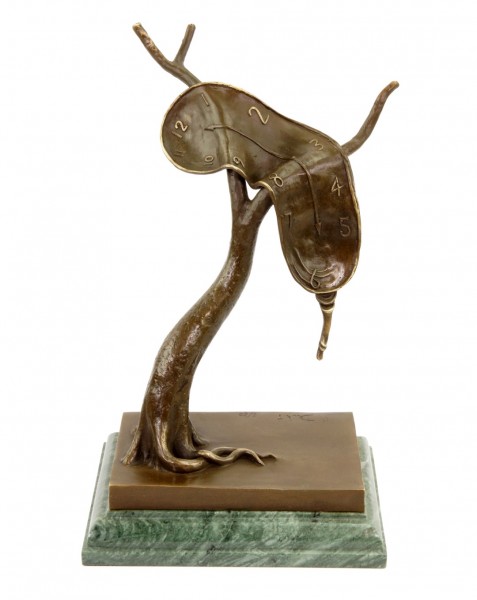 Salvador Dali's famous clocks - in 1931, the Spanish artist created the painting La persistencia de la memoria (The Persistence of Memory), which, contrary to the motif of transience in the image, made him immortal. The oil painting, which is also called Melting Clocks or The Soft Watches, lastingly shaped the period of surrealism. Back then as well as today, the melting clocks are of a strongly symbolic nature, which is also the main motif in this sculpture that was created in 1984 during one of Dali's later creative periods. The contemporary bronze sculpture depicts Salvador Dali's soft watches. This bronze motif is taken directly from the painting, thus the famous clock of Dali is hanging from the branch of a dead tree. The contemporary bronze sculpture is called Profile of Time. A particularly remarkable fact is that the supposedly soft, malleable, melting clock is directly affiliated with the robust, durable bronze material. The contemporary sculpture, which is placed on a green, faceted and rounded marble base, is exclusively limited to 20 pieces and serially numbered.

The production of our numerous bronze statues and figurines is subject to strict quality guidelines. All the bronze figurines in our assortment are created via lost wax technique and are cast and refined by hand.

Salvador Dali, born in 1904 in Catalonia, is seen as one of the greatest artists of surrealism. He became an artistic legend. His oil painting La persistencia de la memoria (The Persistence of Memory) in particular made him an artistic entity in the 20th century. His works can be found in the grand museums of different metropolises around the globe. Already during his life, his paintings and sculptures were immensely sought-after.