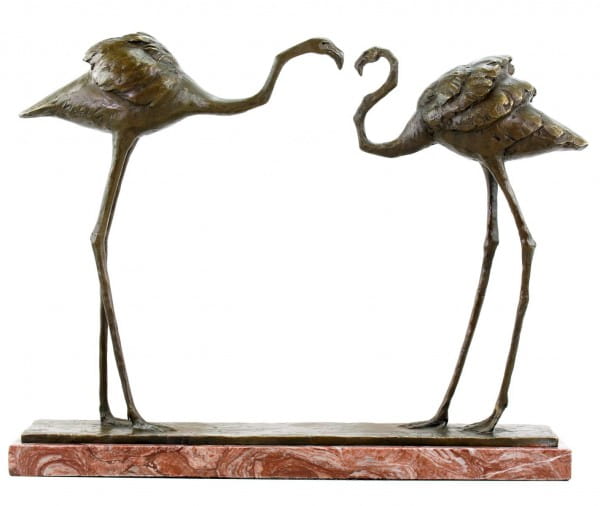 Description Evaluations 0
Description
Two Flamingos by Rembrandt Bugatti is a fascinating animal bronze that was created in 1912 and... more
Close menu

Two Flamingos by Rembrandt Bugatti is a fascinating animal bronze that was created in 1912 and which seamlessly fits in with the artistic heritage of the sculptor who lived most his life in Paris. This bronze statue is exclusively limited to 20 pieces and serially numbered. It depicts two realistically crafted flamingos on a red marble base. The delicate figurines are turned towards each other, so the long legs and sleek necks of the flamingos almost look like frame for the whole motif. With this animal sculpture, Bugatti presents a delicate and at the same time robust group of figurines made of bronze that makes for a beautiful decorative piece. The flamingo figurine is an example of Bugatti’s impressive sculptures that all have animals as their motif. The source of inspiration for this is said to be the Jardin des Plantes in Paris, where Bugatti spent numerous hours in order to create artistic models of various animal species.

The name Bugatti is often associated with luxurious limousines and speedy race cars. As the younger brother of the esteemed automobile manufacturer Ettore Bugatti, the sculptor Rembrandt Bugatti is certainly linked to the famous car maker family. His passion, however, was always the arts. Thus, the name Rembrandt Bugatti is more known for bronze animal sculptures, which made him one of the greatest sculptors of the 20th century. Some of his most famous works are the Walking Panther, the Yawning Hippo and the Begging Elephant.