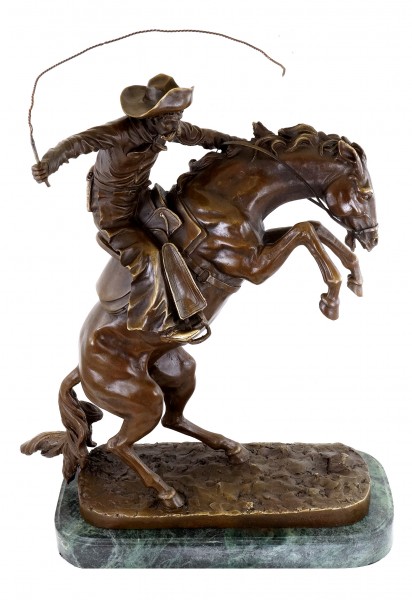 „The Bronco Buster“ is a bronze military statue that is able to experience big politics, as a copy of this sculpture by the artist Frederic Remington graces the presidential office in the White House in Washington. The sculpture shows an untamed mustang in its first seconds of its life as a riding horse, with a cowboy on its back whose one hand grabs the mane and the reins. While the other hand cracks a whip through the air, the cowboy tries to stay on the bucking horse. This sculpture was designed by Frederic Remington in 1895. It was his first bronze piece and simultaneously his biggest success.

This work is limited to 20 pieces in our shop.

Like all of the other military statues for sale in our shop, this bronze military figurine is subject to our strict quality guidelines during its creation and is cast by hand. Additionally, all our sculptures are produced by using the lost wax technique.

Frederic Sackrider Remington (1861 – 1909) was an American painter, illustrator, sculptor and author. His works were inspired by the Old American West. His area of expertise was the American West during the last quarter of the 19th century. Cowboys, Native Americans and the US Cavalry were his preferred motifs. At the end of the 19th and the beginning of the 20th century, he was the most successful illustrator of the West. His style was naturalistic, sometimes impressionistic. He put his focus on animals and people of the West. Landscapes and backgrounds were only of secondary importance in his works. Especially his depictions of horses in motion still impress people today.