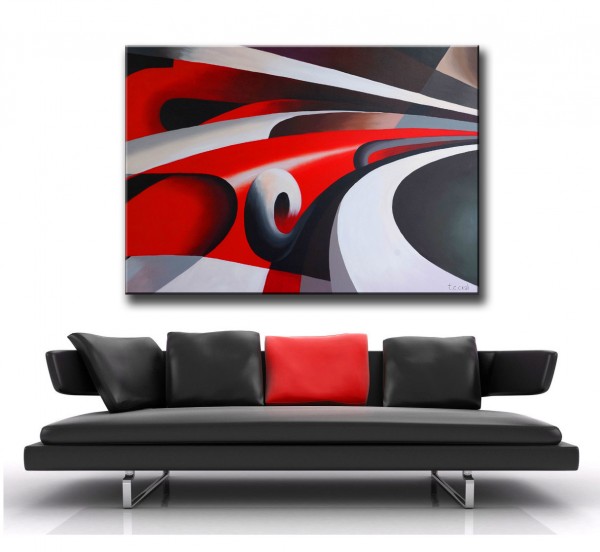 Description Evaluations 0
Description
The artwork "Le forze della curva" – in English: The forces of the curve – was... more
Close menu

The artwork "Le forze della curva" – in English: The forces of the curve – was created by the Italian Futurist Tullio Crali. Tullio Crali was known for his works dealing with the subject of speed, aviation and aerial warfare. The aeropainting, also called Aeropittura, was a major expression of the second generation of Italian Futurism, from 1929 through the early 1940s. The technology and excitement of flight, directly experienced by most aeropainters, offered aeroplanes and aerial landscape as new subject matter. The painting on the left glorified the momentum of the movement; Crali has tried impressively to give a presentation of tempo and dynamics. Like other Italian futurists in his day Crali deals in "Le forze della curva" with the worship and visualization of the velocity. The painting is provided at the lower right corner with the signature of the artist.

All of our paintings are hand-made acrylic paintings or oil paintings and were produced in limited numbers. Because each painting is a hand made single item, small deviations to the painting on the left are possible at delivery.

Tullio Crali (1910-2000) was an Italian artist associated with Futurism. Crali was a pilot and self-taught painter who took up Futurism at a late date for it (1929) but at a comparatively young age for himself. Given his enthusiasm for aviation, he was part of the Aeropittua, a sub-field of Futurism. Despite his relative youth, Crali played a significant part in aeropittura. His earliest aeropitture represent military planes, “Aerial Squadron and Aerial Duel” (both 1929). In the 1930s, his paintings became realistic, intending to communicate the experience of flight to the viewer. His best-known work, “Nose Dive on the City” (1939), shows an aerial dive from the pilot's point of view, the buildings below drawn in dizzying perspective. In 1959 he published the first post-war Futurist manifesto Sassintesi (“Stone Syntheses”). In it he advocated a new form of artistic expression using natural materials - pebbles, stones and rocks formed of various minerals.