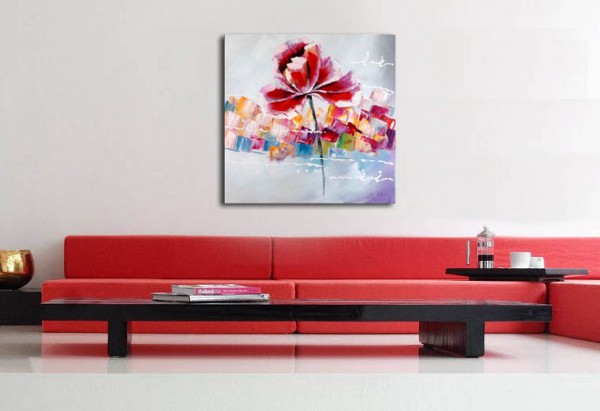 The adjoining painting called "Flower Power" contains what the title promises: In the upper centre of the picture a huge red flower is to see. It symbolizes the positive "power of flowers". "Flower Power" brings spring and summer in your own four walls. The picture is wonderful as a gift for a loved one. It cuts a fine figure in your own living rooms, as well as business premises such as medical offices or law firms. The colourful flower is featured in each case for a pleasant atmosphere. The painting on the left is signed at the lower right of the screen with the name of the artist.

The term "Flower power" is commonly associated with the peace movement, which took place in the late 1960s and early 1970s. "Flower power" was a slogan used as a symbol of passive resistance and non-violence ideology. It is rooted in the opposition movement to the Vietnam War. The expression was coined by the American beat poet Allen Ginsberg in 1965 as a means to transform war protests into peaceful affirmative spectacles. Hippies embraced the symbolism by dressing in clothing with embroidered flowers and vibrant colors, wearing flowers in their hair, and distributing flowers to the public, becoming known as flower children. The term later became generalized as a modern reference to the hippie movement and the so-called counterculture of drugs, psychedelic music, psychedelic art and social permissiveness.

Martin Klein was born in 1979 in Bischofswerda, Germany. With nineteen years he moved to Berlin to study business administration. During his Australian visit, he decided to devote more attention to the art. In Dresden he worked alongside painting with the creation of three-dimensional art objects. He studied art at the Academy of Fine Arts and worked in an art gallery, to finance his second degree. He produces modern, sometimes humorous sculptures. His abstract art paintings depicting mainly landscapes and modern woman acts are characterized by unexcited color designs. Its various acrylic mixing and filling techniques give his works a distinctive character.