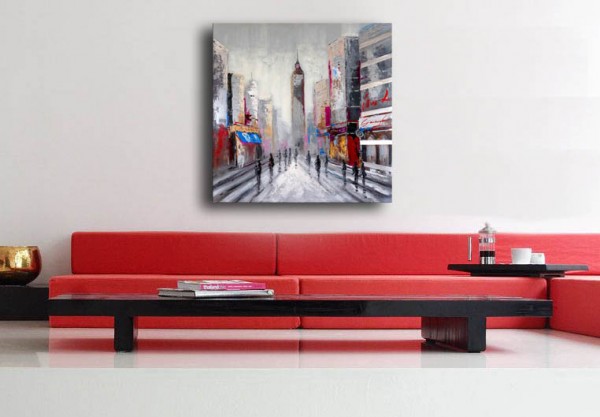 Description Evaluations 0
Description
This oil painting depicts is one of the most famous skyscrapers in the world: the Empire State... more
Close menu

This oil painting depicts is one of the most famous skyscrapers in the world: the Empire State Building. The Empire State Building is a 103-story skyscraper located in Midtown Manhattan, New York City, at the intersection of Fifth Avenue and West 34th Street. It has a roof height of 1,250 feet (380 m), and with its antenna spire included, it stands a total of 1,454 feet (443 m) high. Its name is derived from the nickname for New York, the Empire State. It stood as the world's tallest building for nearly 40 years, until the topping out of the original World Trade Center's North Tower in late 1970. Following the September 11 attacks in 2001, the Empire State Building was again the tallest building in New York, until One World Trade Center reached a greater height on April 30, 2012. In the foreground the painter Martin Klein has arranged a busy street scene. The art work is signed at the lower right of the screen with the name of the artist.

Martin Klein (born 1979 in Bischofswerda, Germany) is a German painter and sculptur. In 2005 he studied art studies at the Academy of Fine Arts in Dresden. From then on he worked in an art gallery, to finance his second degree. In that art gallery, he presented his first works. His exhibition was a success; in particular its modern sculptures evoked substantial interest. The first exhibition in that art gallery was followed by two traveling exhibitions. Its various acrylic mixing and filling techniques give his paintings a distinctive character. In our store you will find many of his works. Look around and convince yourself of the wide range.