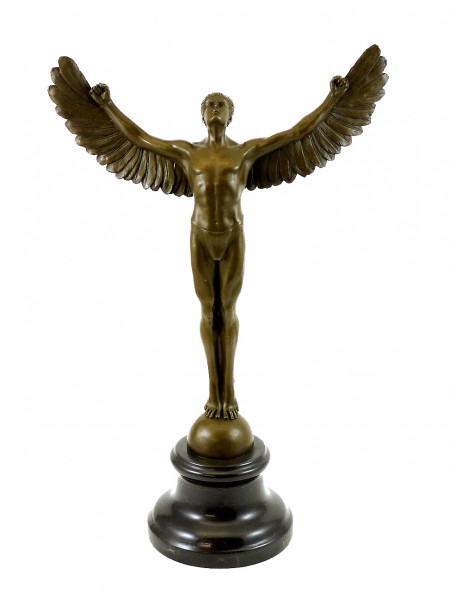 "Rising Day" is the male equivalent to Adolph Alexander Weinman's "Descending Night," also known as "Setting Sun". Weinman designed the sculpture in 1915 for the Panama-Pacific International Exhibition in San Francisco. The winged male figure depicts a figure in Greek mythology, Icarus, son of Daedalus and stands as a symbol of human hubris. Icarus and his father were held captive on the island of Crete, in order to free himself, Daedalus created two pairs of wings made from feathers and wax for himself and his son. His father warned him never to fly too high, as the heat of the sun will make the wax melt and never too low, due to the fact that the humidity of the sea would destroy the wings. But Icarus was very eager, he flew higher and higher until the sun melted the wax and Icarus fell into the sea. The fatal crash is interpreted as a punishment of the gods for flying too near to the sun.

The mythological bronze figure was produced in a complex process and is made from 100% bronze. The lost-wax sculpture was casted by hand, chased and patinated and with this procedure, we guarantee the highest quality for our products.

Adolph Alexander Weinman (1870 - 1952) was an American sculptor of German origin. At the age of ten he emmigrated with his parents to New York, where he later studied sculpture. Weinman designed the motif "Walking Liberty" for the former half dollars, which was later used for the American Silver Eagle, an American bullion coin. He also designed the artwork for the dime, the American ten-cent coin and various medals for the military. Not only with his numismatic work, even with its sculptures, Weinman made a name for himself. Some works by him are located at the capitols of the U.S. states of Wisconsin, Missouri and Louisiana.