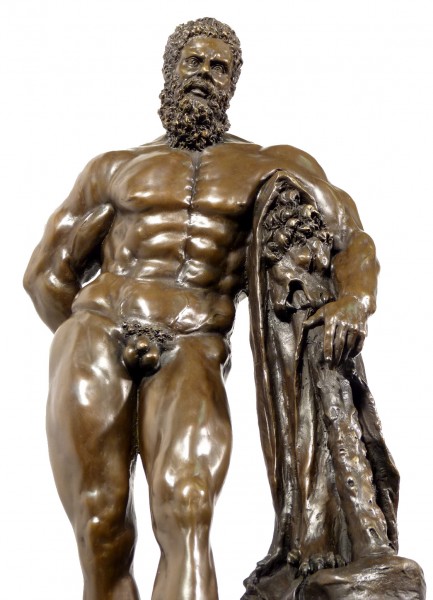 The Farnese Hercules is a massive and muscular marble statue, following a lost original cast in bronze through a method called lost wax casting. It depicts a weary Hercules leaning on his club, which has his lion-skin draped over it. He is performing one of the last of The Twelve Labours, which is suggested by the apples of the Hesperides he holds behind his back. This prominently-sited statue was well liked by the Romans, and copies have been found in Roman palaces and gymnasiums: another, coarser, stood in the courtyard of Palazzo Farnese; one with the feigned ( but probably ancient) inscription "Lykippos" has stood in the court of Palazzo Pitti, Florence, since the sixteenth century. As the original, our sculpture is made of 100% bronze mounted onto a solid base of marble and it is signed with Glycon. The many and filigree details make this sculpture being a special mytholgy art object.

Hercules is the best known member ot the greek mythology. He is the son of Zeus and Alkmene. The sculpture shown here is one of the most popular sculptures of ancient times. The Farnese Hercules is an ancient sculpture, probably an enlarged copy made in the early third century AD by Glykon of an original of Lysippos or one of his circle, of the fourth century BC, made for the Baths of Caracalla in Rome (dedicated in 216 AD), where it was recovered in 1546. The heroically-scaled Hercules is one of the most famous sculptures of Antiquity, and has fixed the image of the mythic hero in the European imagination. It quickly made its way into the collection of Cardinal Alessandro Farnese, grandson of Pope Paul III. Alessandro Farnese was well placed to form one of the greatest collections of classical sculpture that has been assembled since Antiquity.