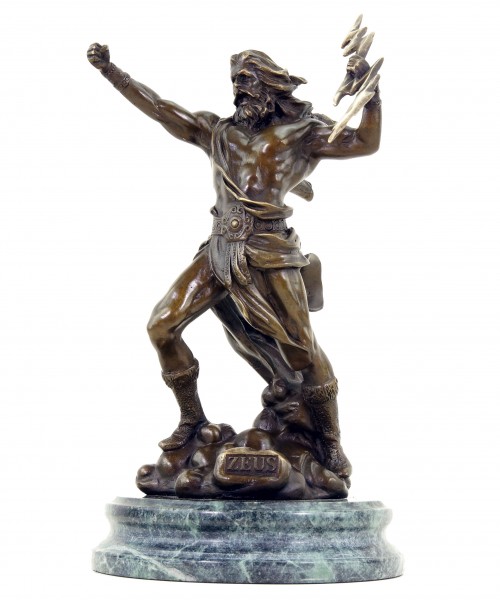 Description Evaluations 0
Description
This mythological sculpture by Giambologna portrays the legendary Zeus, the father of the... more
Close menu

This mythological sculpture by Giambologna portrays the legendary Zeus, the father of the gods. As the ruler over gods and humans alike, the character of Zeus is associated with power and might. Thus, this Greek bronze figurine also demonstrates those attributes and presents an expressive god statue that bears the name Zeus at its base. Placed on a green marble base, the mythological sculpture is characterised by a detailed surface design that is skilfully accentuated by several polishings. According to the numerous myths and legends, the muscular form of Zeus is depicted with long hair and a beard. In his hand, Zeus holds his thunderbolt, which is seen as the main characteristic of the father of the gods. Due to its handy size, the decorative bronze figurine can be versatilely placed in just about any setting. Additionally, the statue bears the signature of the artist.

Greek mythology and its pantheon of gods is a many-layered construct that is pervaded by countless myths and sagas. Thus, a lot of those stories revolve around Zeus, the father of the gods. As a result, his merciless fights against the titans and his father Kronos as well as his numerous love affairs have become the topics of many sculptures. One of the most well-known myths is the abduction of Europa, which is available as a mythological sculpture in our Bronzeshop.